This club is dedicated to the martial art “Naginata.” A naginata is a Japanese pole-arm similar to a glaive (see a video here). Use of the naginata dates back to the 7th Century, but in the 15th Century, it was phased out of the Japanese battlefield in favour of the yari, or spear. Naginata were then used as a form of character building in times of peace, and associated with women of samurai families. Knowledge of the naginata became a part of girls’ education in the 20th century. In the years since World War II, the art of Atarashii Naginata (“modern” Naginata) has spread beyond Japan to fifteen other countries. It is now a completely co-ed martial art, with regular national and international competition for both women and men.

The Naginata club at McGill welcomes all students, of every level, and especially those who have never tried (or seen) Naginata before! There is practice for both the competitively minded and non-competitve student. All equipment for beginners can be borrowed for the first few months.

In June 2015, the 6th World Naginata Championship (WNC) and International Naginata Federation seminar was held right here at McGill University! The WNC is held only once every four years and this was Canada’s first time hosting the event. The men’s team finished 3rd in the Team Shiai (combat) division, while Marija finished 4th in Individual Shiai. We hope that Naginata at McGill will grow from this auspicious beginning. 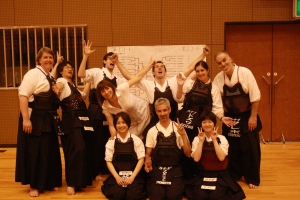 Our students also have the opportunity to study the classical (koryu) art of Tendo-ryu naginatajustsu, including seminars organized by the Shin Getsu Kai. Tendo-ryu dates back to the late 1500s, and was taught to high school girls across Japan before World War II. Students interested in Tendo-ryu will need to attend one or more of the monthly out-of-town practices to begin their training, and attendance at an annual week-long seminar, held at the end of June, will be necessary to progress.

2 thoughts on “Welcome to Naginata in Montreal!”

Everyone is welcome to join, just come to the next practice! If you would like to register, please see Simon or Marija at the beginning of practice.

Practices are in the Aerobics Room at the McGill Gymnasium on Wednesdays 8:00-10:00PM and Saturdays 3:00-5:00PM. Check the schedule in case of changes.

Send an email or check the Facebook group for more information.

We are grateful to the SSMU for providing funding to support the club.